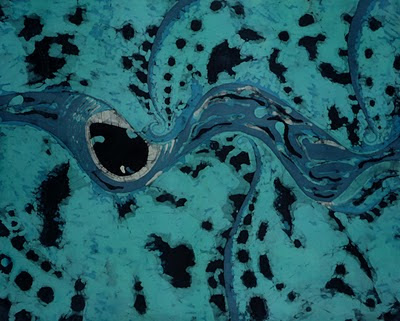 The 'evil' is a joke for myself - I managed to splash hot wax on my hand while making this batik.. lesson learnt, and no real damage done!
I actually think of this as the 'shy eye' - the siphon of a giant clam.
I really enjoyed doing this one - have reached a point of saturation with the flower and tree themes I think; atleast for now.
No comments:

the first leaves that fall 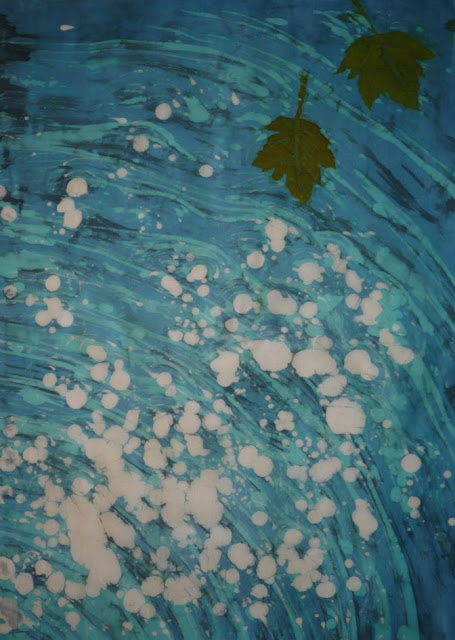 this started off with the desire to make drops of wax fall from high up.
Two realisations : 1.  the wax splashed less than I thought it would.  and 2. the dropping was very difficult to control (both quantity and position)
No comments:

après la plage (after the beach) 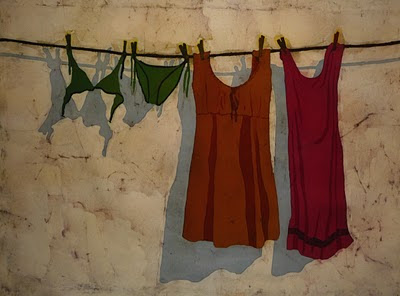 Shadows are strange things - I had to rig up a clothesline and lighting, and hang my clothes to figure these out.
Also like the crackled and patchy effect on the wall.
No comments: 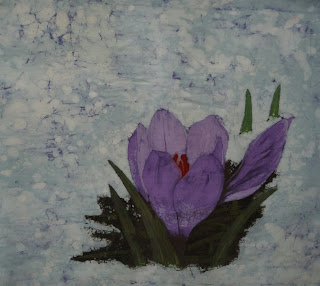 Not terribly exciting.. but I had fun doing the snow, and working with the 'transperency' of the petals.
2 comments:

I just delivered the 2 batiks bought by S.  It's strange, but it was kind of difficult to let them go.
Well they're not the literally the first to be sold, but the first ones were on commission, so in a way I was already prepared to have them go while making them.

I suppose I'll get used to the 'letting go' - it hopefully means that people want to buy them!
_______
My current preoccupation is the framing of the batiks for the exhibition in March - for once I'm trying to be organized and not to leave things for last minute.
It's been an interesting exercise getting these 2 framed.  Finding the balance between aesthetics, economy and simplicity.
No comments:
Newer Posts Older Posts Home
Subscribe to: Posts (Atom)

You can also see the batiks organised in thematic galleries on my website.
http://www.shasha-shaikh.com/
Prices range between 100€ - 1500€
Please feel free to contact me for any detailed information.

some (amongst many) artists I admire

shasha
I like to walk barefoot in the grass, and feel the wind in my hair..

thank you for visiting